The Saturday before last, when I returned to my apartment after a morning hike, I saw that my cat’s beloved stuffed poodle had been placed prominently on their cardboard scratchpad. I smiled: there is a sweetness to witnessing the evidence of my pets’ unseen movements while I’m away. Then I realized with a start that I had not seen this particular toy move in nearly a month. Since the beginning of October, the poodle had been languishing under the bed–where I placed it myself, hoping to comfort Anise while she was sick.

To explain why the wandering poodle is such a big deal, I will need to explain more about Anise. One of a pair of sisters I adopted shortly after moving to Philadelphia thirteen years ago, Anise has little of the archetypal aloofness ascribed to her species. She cares very much what her human companions think of her. When I have friends over, she presents herself as soon as the situation passes a security check known only to herself (my guess would be “fewer than ten people, most of whom are seated”) and dutifully walks from guest to guest, lightly rubbing a few legs on her rounds. Despite her age and cobby build, she is capable of leaping across substantial distances–and she seems to time these jumps so that they happen in the sightline of my gentleman friend, who always makes a show of being impressed. She once paraded back and forth in front of my bathroom door while a plumber repaired the taps, prompting him to croon “There’s that pretty cat! There’s the pretty cat with the short legs!” on her third or fourth pass. Once, when I had a neighbor and a friend over to watch a movie, she became smitten with the friend and curled up next to him on the couch. When my neighbor (who takes care of the cats when I’m away) pretended to take offense, Anise got up and repositioned herself next to her hip, accepting pats from the hand that sometimes feeds her–but she continued to gaze back at her new crush with enormous saucer eyes. Anise loves and wants to be loved; she understands manners and wants you to think well of her.

Aside from the occasional use of silly nicknames and made-up songs, I mostly talk to Anise like a person. The reason for this is that she gives the appearance of listening like a person. “I would prefer that you didn’t do that,” I’ll say to her as she grooms my arm, and she’ll look up with her eyes round and glistening, and she’ll go back to cleaning her fur for a few beats until she comes back to my arm again. “Please think about what you’re about to do,” I’ll say to her as she balances on the arm of my couch, so she fussily settles herself into the shape of breadloaf and waits until my gentleman and I finish our dinner. When we set our empty plates aside, she trots merrily across our laps and wedges herself between us with the satisfaction of the righteous.

Even without meowing–this is an aesthetic choice, she can meow but prefers not to–Anise is fairly proficient at communicating her own wishes and preferences. Most of her expressions are extremely legible, from the pointed stares to soulful gazes. The exception to this expressive clarity is her poodle ritual. The poodle is a plush toy about twice the size of her head; when she carries it, she has to lift her head high so that it doesn’t drag on the ground. As she carries it from one room to another, my quiet cat yodels around her mouthful of stuffing. The sound reminds me of a mother cat calling her kittens, but she doesn’t otherwise coddle the poodle; it is dropped unceremoniously as soon as she gets where she is going. It isn’t a toy, either–it never gets chased or kicked around like one of the fake mice favored by her sister. (Ascher doesn’t touch the poodle, as it happens.) Infrequently, the poodle makes a symbolic appearance: facedown in an empty food dish, dropped into my luggage before a trip, tucked under the blanket when I wake up from a bad dream. But most of the time, Anise simply carries the poodle from one room into another, usually from an empty room into the room where I’m sleeping or watching TV, usually around bedtime, always calling her haunting muffled cry.

I’ve never been able to figure out what the poodle means to her. I’m not sure what it means for something to have meaning to a cat. But more than any of her other pleasant social behaviors, it is the poodle ritual that makes Anise seem more like a person than a creature to me. There is a kernel of her feline mind that is utterly inexplicable and unknowable, although it has manifested in a consistent behavioral pattern several times a week for more than a decade. And because it doesn’t influence or derail the daily activities of our comfortable household, I have never unraveled it. Perhaps much of my life looks the same way, to her. 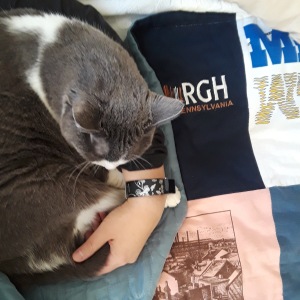 Some of my friends asked me how I knew that Anise was sick, since it’s common for cats to hide their illness. Anise did not alter most of her little routines. She still wanted to sleep close to my heart, but it took her longer to make her way to bed after I turned out the lights. She still wanted to eat breakfast and dinner, but picked at her food and struggled to keep it down. She has always liked to be close, but she clung to me and her sister, burying her face against whoever was nearest. The rest of the time, she slept under the bed. I placed the poodle underneath, and a bowl of water just beside it. The water needed to be replaced daily, sometimes twice a day. The poodle didn’t move.

She had pancreatitis, which in cats is fairly treatable if you catch it soon enough, but it often indicates another issue. In our case, the other issue turned out to be inflammatory bowel disease, which also has a promising prognosis. It is now almost six weeks since I first took her to the vet, and almost two weeks since she started her steroid treatment (which she doesn’t care for, and she’ll run me a merry chase if I’m not sneaky enough). She wants to eat everything–especially whatever I am eating–and has taken to lingering in windowsills where she can get a good look at my plate. She curls up in her place by my heart as I fall asleep; she finds her way back before I’m fully awake, but in the dreamy window between my alarms I hear her chattering at the birds outside my window. And she marches the poodle up and down our spiral stair on a schedule known only to herself, bringing it wherever she feels it is needed most.